Wheatgrass is quite popular today, especially as a menu item in trendy juice bars.  The truth is that wheatgrass has a rich history and a wide variety of health benefits that many people may not even know about. 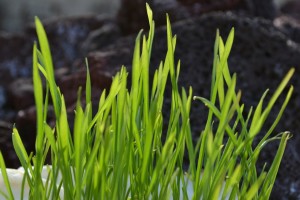 What is Wheatgrass Exactly?

Wheat Grass is exactly what its name implies …. it is the young shoots (grass) of the wheat plant.  However at this early stage of the wheat plant’s growth, these shoots are considered more like a vegetable rather than a grain … which makes it safe for those allergic to gluten.

Did you know that wheatgrass has been around for more than 5,000 years and has been traced to Egypt and possibly some early Mesopotamian civilizations?

In western civilizations, wheatgrass was first used in the 1930s when used in experiments by Charles F. Schnabel who was working to popularize the plant. Within a decade, Schnabel was successfully selling cans of the powdered plant in major drugstores across America and Canada.

Today . . . you can juice wheatgrass yourself or find it at most juice bars where natural beverages and juices are sold.

Flavor Alert!  Most people find wheatgrass to be an acquired taste, as it has a rather strong bitter taste.  So just how much you will enjoy may vary.  The good news is that wheatgrass is so potent that typically it is served in shot glass portions.  A little goes a long way.

It Supplies Lots of Nutrition:  Wheatgrass, which is 70% chlorophyll, is commonly sold as a juice or a powder, which supplies concentrated sources of nutrients such as:

Due to the natural chemicals found in wheatgrass, it is thought to be a rich source of antioxidants.

It’s An Alkaline Food:  As it’s broken down in the body, food produces either alkalizing compounds or acids. Wheatgrass is an alkalinizing food and a diet rich in alkalizing foods supports alkalinity and therefore natural homeostasis in the body.

Overall, this super plant food has been crafted by nature to offer a host of health benefits that can help you heal . . . and will keep you feeling great.

This post is for INFORMATIONAL PURPOSES ONLY and is not a substitute for medical advice, diagnosis, or treatment. Always contact your doctor or other qualified healthcare provider with any questions you may have regarding a medical condition or treatment and before undertaking a new health care regimen. And never disregard professional medical advice or delay in seeking it because of something you have read on this website.
. . . . . . .
Disclosure: This page may contain external affiliate links that can result in us receiving a commission if you choose to purchase mentioned product(s). We appreciate your support!